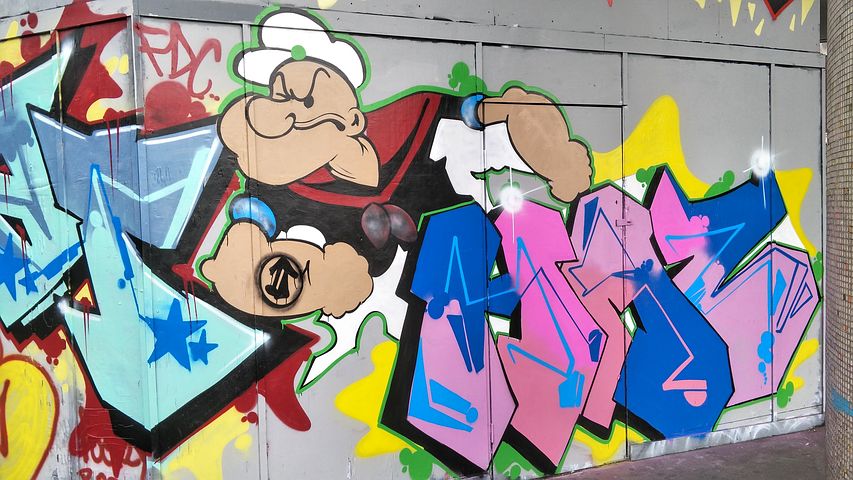 It turns out that Popeye the Sailor was designed to gain his strength from spinach because 150 years ago the German chemist Eric von Wolf miscalculated the actual amount of iron in a spinach serving! His miscalculation led to the belief that spinach provided 35mg of iron per serving, an amount unequaled by any other food.As a consequence, the studio that created Popeye envisioned the character as a big spinach-eater and, in turn, a whole audience derived a spinach-eating habit based on an over-estimated iron gain promise. You can read more about this story here.

Spinach is still a good source of iron, but likely insufficient considering the actual amount it provides (3.5mg/100g serving). However, the sad reality is that the adding milk, heavy cream, sour cream, or cream cheese to the creamy spinach will completely and entirely COMPROMISE the absorption of the highly sought after 3.5mg of iron! If you didn’t know the ingredients in the spinach cream recipe, nothing easier to find out: simply search “spinach cream recipe” in your favorite internet browser and see for yourself. Go further! Read more about other ingredients in dishes that you order often thinking that they come with a healthy amount of iron. You’ll be surprised, no doubt! I fell into this trap myself – check out more about my own adventures on this topic.

Iron metabolism is a counter-intuitive process. Controlled by absorption, rather than excretion, the amount of iron in our body depends entirely on your food and medication intake. While maintaining a minimal drug level of any kind is generally challenging due to our body’s capacity to quickly get rid of what we put inside (i.e. antibiotic, headache meds, etc.), things happen differently with iron. This is not particularly unique and you may have read on this website about at least one other molecule behaving similarly: retinol, an active form of vitamin A. Same as with vitamin A, humans cannot remove iron from their body either. Not even a little bit, not at all! The only exceptions are bleeding and hemolysis: when we bleed or when our red blood cells pop, we lose iron – otherwise it won’t ever leave your body, it’s yours to keep! Whatever you put in, stays in. Maybe that’s why the human body is very picky about absorbing it. We don’t know for sure about Nature’s planning in this evolutionary development, but I can tell you with a high degree of confidence that, because of this absorption difficulty, iron deficiency is the most widespread nutritional disorder in the world.

While the iron deficiency anemia (IDA) causes in various countries around the Earth may be different, my gut guess is that the reason behind IDA occurrence in industrialized countries hides behind the tasty delicious food that they can afford. It may seem crazy that adding fat-free sour cream to your spinach will kill you as much as the actual fat removed from the sour cream, but it’s true. Why? Because removing fat does not remove the calcium – which I bet you thought to be healthy for your bones and preventing osteoporosis. With the risk of repeating myself: remember that the calcium from the sour cream, or any other dairy product, or orange juice with calcium, or from the multivitamins you take, will prevent the iron from getting absorbed into your body. How often does this happen? More often than it should.

Could it be the cuisine abundance and delicious recipe creativity that dooms us as much as the lack of food would? Well, judge for yourself! Go get the recipe off the internet and see whether any dairy product makes it into the delicious dish that you assumed to provide you with your much needed iron. You’ll likely be as surprised as I was!

Now, let’s assume that somehow some iron made it into the body. Once it has been absorbed into the bloodstream, it will be directed for either immediate utilization or long-term storage. An adult human body normally holds about 4 to 5 grams of elemental iron. Of these, 2 grams are stored in our red blood cells as heme in hemoglobin, having a vital function: they help carry oxygen from the lungs to the tissues and carbon dioxide from the tissues to the lungs for exchange. This is a vital function. Should this function be performed any less than perfectly, the consequences will be disastrous: cognitive development problems in children and teens, tiredness and depression in adults – particularly women, poor organ and tissue function, chronic inflammation, etc.

As you probably know already: a brain without proper oxygenation is a malfunctioning organ on its way to shut down. The brain dies within minutes without oxygen. Hence, the body will work desperately to provide oxygen to the brain for survival to the detriment of all other organs. That’s when a slow chronic anemia will install over time leading to one of the worst possible physiological changes: the low chronic inflammation. From my perspective, chronic low inflammation is easily the cause of most disease-related complications. It is triggered by many causes, including but not limited to smoking, high-fat diet, lack of exercise, and … hypoxia due to anemia. Chronic inflammation increases the risk for and exacerbates diabetes, cardiovascular disease and cancer. Although not a direct killer, over a longer time anemia leads to physiological changes that counteract even the best possible treatments that we can provide. Anemia leads to the occurrence of a hypoxic environment. That’s when we need to look at and understand the overall context of the symptoms that a patient comes with. A healthy diet is the best way to go, but it fails to provide quick enough changes when it comes to provinding sufficient iron.

If you were told that your hemoglobin is low or your red blood cells are unusually small, then lack of iron may be the cause. Low hemoglobin may have more than one cause, so discuss this with your clinical provider before considering iron supplementation. If that is not possible, don’t hesitate to reach out, I will be glad to take a look at your labs and share my opinion. Iron supplementation is a process that must be monitored closely to ensure that it moves along optimally and safely. Various sources of iron deliver various amounts of elemental iron. It is, of course, logical to think that the supplement with the highest amount of elemental iron will deliver the most amount of iron to your body. That’s only partially true. Should you take it at the wrong time of the day, too soon before, or to quickly after a meal or drug that contained calcium or another medication that interferes with the acidity of the stomach, that generous iron supplement will be as good as none. Even worse, the less is absorbed of that big amount, the more will end-up in the gut where it will destroy tons of your healthy bugs that I assume you work hard to keep in the right balance. This event will cause water re-absorption and dry-out the fecal bolus leading to terrible constipation. That’s exactly when you hear “I can’t tolerate iron, don’t try this again, thank you very much!”.

Did this happen to you or you heard about it and got discouraged? Take a step back. Here are the clues you need and you can always reach out with more questions. When you plan to supplement iron evaluate first why you are lacking it in the first place.

Any of the above or all together may be the cause of your low iron. If so, I’d say: pick ONE. Only one of the above may be the permitted fault that you can get away with. You name it! Whichever ONE you must have, that’s ok – there, you can have it! Nope, there cannot be TWO because a vicious cycle defeats even the best iron supplementation plan! Luckily, there is no life-long iron supplementation. Once we put sufficient iron in, then things go back to a normal for a long while. Remember that only bleeding or hemolysis can take out the iron that you put in. Thus do this supplementation correctly once or twice a year until the hemoglobin goes back to normal and you are set to go! Yes, then you could get back to what you were doing; however, if that may be ok from an iron perspective, it may still be entirely wrong for a different reason and that’s a different story.

Rule #1 – Choose the iron supplement recommended by a pharmacist that you trust. Notice the few I recommend in this post and in Dr. Alice’s Shop. Depending on your clinical circumstances, I may recommend a supplement that delivers more elemental iron, but that will require a more cautious approach. Contact me at any time and let’s talk about it!

Rule #2 – Take the iron first thing in the morning with orange juice or lemonade, on an empty stomach. If possible, take it with vitamin C, as the acidic environment helps iron absorption. If this upsets your stomach in any way, next time try a few crackers or a slice of bread before.

Rule #3 – Absolutely no milk, yogurt, creamer or any other calcium-loaded food within 2h of taking iron. That includes cakes with whip cream, chocolate shakes and cappuccinos. None allowed in the morning – no exceptions.

Rule #4 – Absolutely no other medication at the same time with iron unless confirmed by the pharmacist to be ok. Contact me if in doubt!

Rule #5 – Visit my drug files to find out all about our knowledge to-date related to iron, check out Dr. Alice’s Shop for more iron supplements, and stay tuned for my next post to learn more about how to monitor the effectiveness of your supplementation and how to handle iron-related side effects, if any. Share what you learned in mean time and stay healthy!

Where to get an iron supplement for yourself

3 thoughts on “The iron, the spinach, and Popeye the Sailor”